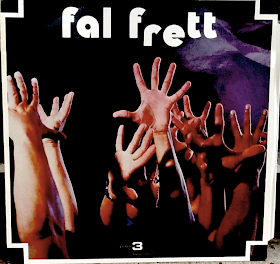 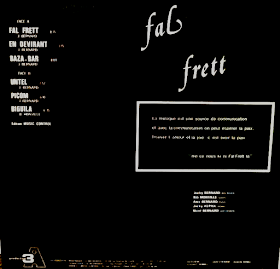 First album from the band "Fal Frett" - you may have seen their second album at The Growing Bin last month.

Big thanks to Orangefunk for ripping and donating this album, and please give him some thanks in the comments!

Looked for some history on this album and found some in a Googlebooks excerpt from Brenda F Berrian's book "Awakening Spaces : French Caribbean Popular Song, Music and Culture". Successfully grabbed the text with free OCR software and here we are :

"One of the most talented families on the contemporary Martinician musical arena is the Barnards. The grandfather, Armand, was a violinist, and his sons Gaëtan and Parfait continued the tradition : the former was another violinist and the latter, a keyboard player.

Raised in a household where music totally surrounded them, it was only natural for Parfait's sons Alex, Jacky and Nicol to love playing instruments. Alex, the oldest and a bass player, is the only full-time musician among the brothers since he quit his job at the Hopital de la Meynard. He studied with Edmond Michalon and, as a bass player, joined the jeunesse Etudiante Catholique (Catholic student youth group), to which other aspiring musicians belonged, such as the pianist Paulo Rosine and the flutist Serge Lossen. In 1969, he joined the Merry Lads, which evolved into Malavoi, and he continues to play with the band today. Furthermore, between the two disbandments of Malavoi in the 1970s, Alex took the opportunity to go on tour in Canada with Marius Cultier.

The multiple instrumentalist Jacky, born four years after Alex, commenced playing the piano at age eleven. In 1970, he passed his baccalaureate and left to study law in Paris at the Faculty of Assas. While there he began to perform at Caribbean venues and worked in the recording studios. ln 1975, he returned to Martinique where he played the piano and keyboard in piano bars, especially at the Inn of Monsieur Duban in the town of Riviere Salée.

Nicol, the youngest of the three, born in 1956, familiarized himself with several instruments, but at age fourteen, he seriously studied the bongos and other percussion with Colette Frantz and eventually with Henri Guédon. Since then Nicol has become known as an accomplished percussionist. In 1969, Nicol participated in a jazz concert with his brothers at the Cercle Martiniquais. Afterward, he left to study in Paris, where he became a member of Guédon’s newly composed Cosmos Zouk.

At age nineteen in 1976, he returned to Martinique and agreed with his brothers, Jacky Alpha, and Bid Monville to create Fal Frett. In 1976, Fanny Augiac proposed that Fal Frett should make its debut before the public at the Centre Martiniquais d’Action Culturelle (CMAC). The band’s ﬁrst concert repertoire was taken from its ﬁrst record Fal Frett, which was released by Jacky Nayaradou’s 3A Productions. Afterward, Ralph Thamar and Robin Vautor joined the band, with Jacky Bernard functioning as the leader on the second album In the Wake of the Sunshine. Jacky was responsible for organizing the program so that the music in each set followed harmonic key changes.

In general, what makes Fal Frett stand out is the band's distinctive sound, which some call jazz fusion. This is in reference to the band’s incorporation of traditional Martinican musical themes and an extension of them along more jazzy lines."

Fal Frett apparently means "the action of being overcome, gripped or stunned by something".